DECEMBER/JANUARY
November 17, 2014 through January 10, 2015
Ari Melenciano and #bgoti project
Reception, Friday: TBD
Posted by Amy Kincaid at 8:49 AM No comments:


Context for the Art-ifacts

Patti asked me to offer some context for the art and objects placed in the auditorium and the atrium area. So, a little background about 3 things: the artifacts, the cubes, and the phrenology heads.

The artifacts. Early in 2008, Tom asked me about commissioning a collage that would riff on his brain scan films, which he found to be very cool and very interesting. Which I found to be creepy and overly scientific.

We kept talking and more material surfaced: in addition to the films showing lateral and vertical slices of his brain on grids, we had dark spots in the brain, MRI beeps that sound like Steve Reich or John Cage, the book A Journey Round My Skull by a Hungarian writer describing his own brain surgery, holiday seizures, books by Oliver Sachs, a horror movie poster, zipperhead scars, 16th and 17th century wonder cabinets, the man with the face tattoo, Tom and Patti’s collection of phrenology heads and brains in various media, and a lot more.

It began to feel like this story called for something bigger than a two-dimensional collage—something that spoke to the brain function and illness, but also to family, community, and adaptability, and that would illustrate an irreverent sense of humor and quirky aesthetic. So, to our idea palette we added a shipment of plastic “fourth quality” medical teaching skulls, then contacted a slew of artists and family members, and, stirred. In the end, we created a sort of walk-in Wonder Cabinet of curiosities and named it Cranial Vault—a multisensory, mixed-up media, intergenerational, very alternative, multiple artist exhibit that we installed in the gallery upstairs and later at a café in Silver Spring.

We’ve brought in some of these items today as remembrances and reminders—a set of beautiful and odd souvenirs to surprise and amaze you.

The cubes. This is a brand-new piece that Tom envisioned and described to me a few years ago. He asked his dad to have the open boxes fabricated in rebar. And he left it to someone (well, me I guess) to figure out how to procure and place glass globes inside. These are handblown glass fishingfloats made by an artist (Ana Willow Obermayr) in Portland. 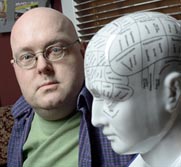 The phrenology heads.  Phrenology was a Victorian-era psuedoscience that involved measuring the skull and mapping sections of the brain to correlate with specific character traits. Tom’s cancer was in the left parietal lobe, which is strongly associated with disorders related to language processing and speech. For our exhibit in 2008, Tom and Patti’s friend Norman Kelly created a coloring book image and we made a zillion copies of it for visitors to Cranial Vault to fill in. These pages were later bound into a handmade book.

Norman has created a new Memorial PhrenHead—there are copies in your programs and in the atrium area afterwards—and we invite you to fill in these brains today with memories, thoughts, ideas and leave them in the baskets.

So, here I want to close with just one of the many passages Tom and I marked together in Frigyes Karinthy’s book and then a reflection. The passage is about the life-affirming connection between science and art and it feels like a fit for our creative partnership:

While I am a great admirer of science, I claim the respect of its representatives for what I must call my ‘artistic’ conception of life. Art is a complimentary source of truth, for it enlists the help of the imagination to carry mankind beyond a mere observation of facts. Real achievement is possible only when both work in association.”

After the service, I invite you to rediscover some of the “artifacts” and hope they might serve as conversation and connection points. As I reflect on the items we’ve collected and made over the years, I feel like they stand in for the weird and wonderful, cool and terrible, surprises we each can discover in the journey around our own lives. Our challenge is to greet them with an open mind and with flexibility, quiet courage, humility, and a willingness to embrace changing circumstances and a dynamic cycle of life’s new normals. Tom showed me that.
Posted by Amy Kincaid at 6:10 PM No comments:

I'm happy to be participating in Art Hop Takoma this spring. The weekend of art + local business + community is March 24-25, 2012 and will turn Old Takoma’s main street into a neighborhood arts district. Free to the public. Last year’s event featured a mix of including photography, jewelry and wearable art, sculpture, installations, collage and mixed media works in more than 30 businesses throughout Old Town, The Junction and Takoma DC.

My collage-paintings will be in Rerun — Vintage clothing for the mind.

Reception date and time: TBD
Posted by Amy Kincaid at 5:09 PM No comments:

Some months ago, I ran into someone who had purchased a Kansas-y collage a few years ago. I'd made it shortly before that show (at Kefa Cafe), and hadn't made a photograph. I asked him to do it and he kindly pulled it off his wall and photographed it on the floor. It was so nice to see this old friend. The painting, I mean. It was lovely to reconnect with the quiet, warm young gentleman who'd "just known" about that painting.
Posted by Amy Kincaid at 5:05 PM No comments: 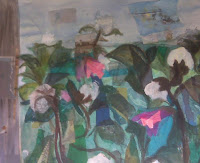 Two paintings that resulted from reflecting on a summer work trip to the Mississippi Delta. Overexposed and wiggly, as they were snapped by phone on the floor of my car before being framed for a show.
Posted by Amy Kincaid at 7:23 PM No comments:

Description of Exhibit in Local Newsaper

Not exactly a review, but a description of the show in Connection.
Posted by Amy Kincaid at 6:47 AM No comments: 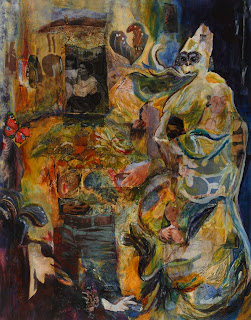 Here's a bit about the Fall Exhibit at Gallery Har Shalom.

All art pieces will be available for purchase, with part of the proceeds benefiting Har Shalom.The gallery is located at Har Shalom Congregation, 11510 Falls Road, Potomac, Maryland.


Come by if you can—the reception will be Sunday, November 6, 11am to 1pm.  I'm planning to bring a work or two in progress to the reception to show a bit about the process.
For more information and directions, please call the synagogue office at 301-299-7087.
Posted by Amy Kincaid at 2:45 PM No comments:

My collage-paintings are experiments in structured improvisation, informed by post-modern movement and performance. Rather than suggest a specific narrative, I am trying to reflect the individual’s connection with universal themes of autonomy, community, culture, and place. What always interests me is the layered richness, irregular edges, and internal textures of mood.

Amy Kincaid began creating and showing artwork locally in 2003, receiving awards in mixed media, presenting in alternative spaces and galleries in the Washington metro area, including Artful Gallery, The Warehouse, Arlington Art Center, and the Corcoran School of Art’s Art Anonymous. An advisor and technical assistance provider to leaders in nonprofits and social enterprises, she also curates the alternative gallery and performance space at Kefa Café in Silver Spring. Kansas City-born and -raised, Amy lives in the Washington, DC area. 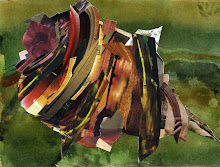